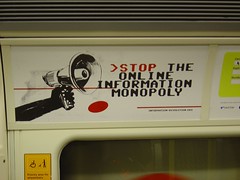 Last week a UK guerrilla marketing campaign launched by ASK was photographed on a train on a London subway featuring ASK’s familiar oval logo background shown below the loudspeaker (photo credit Ben Werdmuller). The campaign has raised the ire of a few people and opened the eyes of some others. All-in-all, the campaign has been shown to be one hell of a news-making promotion… which has undoubtedly forced a grin from the staff at ASK. Anyway, here is a little run down on the events to date:

The advertisement is actually rather anonymous, merely suggesting that viewers visit www.information-revolution.org. Once on that site, however, if you look around the page you can ultimately tell it is a ASK website via the logo on the bottom right of the page.

So what the heck is all of this about you might ask? Well ASK is railing against the UK’s widespread adoption of the “biggest search engine”. The following snippet says it all, without saying Google, of course:

According to the Information-Revolution blog, the purpose is against “settling for the status quo”. Further the March 15th posting states: “Google has a very good search product, and we’re not preaching that people should abandon it. Some people are mistaking this movement as a movement against Google.”

Personally, I think the image on the right makes it fairly indisputable that Ask has launched this against Google. This screenshot (right) was taken by Danny Sullivan before ASK removed it from their results (original). This image of a puppet was shown whenever a user typed in “Google” in ASK.co.uk search. To be fair, it is unknown if this occurred on other search engine searches – anyone know the answer to that question? All-in-all, I see no reason why ASK would dispute the intention of their campaign… of course it is against Google and I see nothing wrong with that.

Whatever ASK’s reasoning is you can expect to hear and see much more about this ‘movement’. According to a recent interview Danny Sullivan had with Jim Lanzone ASK will be launching radio and TV advertisements depicting faux revolutionary takeovers of UK news stations to get out the word on the “information revolution”.